How and Why You Should Chit Your Potatoes 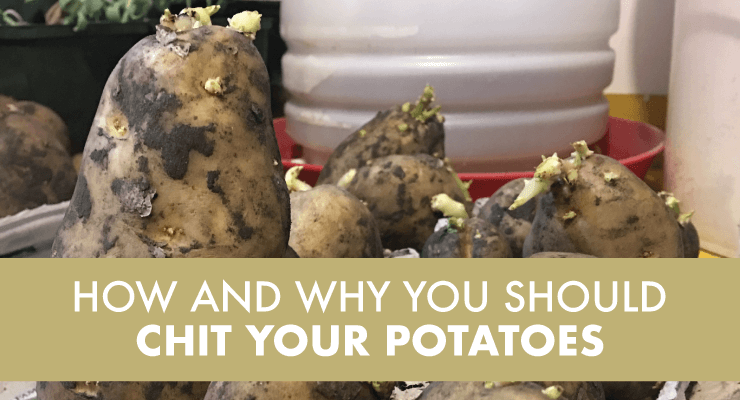 Every year that I garden, I try to find new and easier ways to do things. One of my more recent discoveries is Potato Chitting!

I love discovering new gardening techniques. When I came across potato chitting the first time, my mind was blown! I couldn’t believe how something so easy, could help my potato harvest.

What is potato chitting?

Potato chitting is the process of pre-sprouting your potatoes. By exposing your seed potatoes to light, you are encouraging them to produce shoots, prior to planting them out. The shoots produced are strong and hardy. This is contrary to what we find in grocery store potato bags, or on potatoes stored in a dark place – long lanky white shoots – that have no strength at all. Those potatoes are reaching and looking for light. Potatoes that are placed near a light source don’t need to stretch in search of light. Their shoots are short and strong, just what you need for potato planting.

Many people will say that they’ve successfully been growing potatoes without chitting (pre-sprouting) and never had a problem with their harvests. I felt the same way about my potato harvests in the past. The plants grew well and produced beautiful green leafy growth. However, upon harvest I often found that I was searching in the soil for more potatoes, while feeling that my harvest fell short.

Last year, I attempted chitting my potatoes for the first time and ended up with a much larger harvest, than in previous years.

It was actually my first bumper crop.

Reasons to Chit Your Potatoes:

Gardeners in the north have a shorter growing season and often feel that they are chasing the clock. If they don’t get their crops in on time, they may not be ready for harvest before the first frost. By giving your potatoes warm conditions and the light they need, they will develop strong shoots, that continue to grow after planting outdoors. This time savings is very effective if your season is short, or if you set your potatoes out later than recommended. 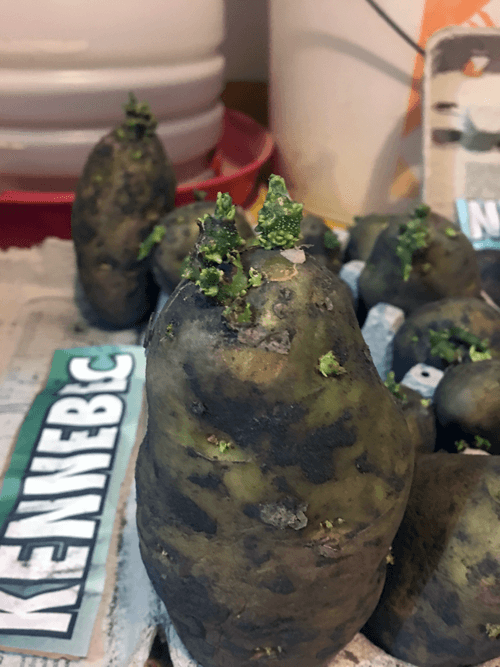 Kennebec potatoes after chitting for 2 weeks.

By giving your potatoes that head start, it encourages them into growth mode, before they get planted out. If a potato gets planted out, without chitting, it will take two to three weeks for that potato to begin growing and sending out shoots. This two to three weeks time savings will ultimately produce a potato crop that is ready for harvest, that much earlier.

Potato chitting is most effective for early potato varieties, which benefit from chitting by being ready for harvest much earlier than non-chitted early potatoes. Choose varieties like, Norland, Purple Viking, Pacific Russet, Red Gold, Purple Majesty and Yukon Gold.

In my experience, a chitted potato produces more tubers, than a non-chitted potato. As a result, you benefit by having a larger harvest. I believe this is due to a properly chitted potato having healthier and stronger shoots.

I always recommend purchasing seed potatoes for potato planting. Seed potatoes are guaranteed to be disease and virus-free. They are specifically selected and developed to produce a better quality potato, with a higher yield. With seed potatoes, you are able to choose which variety you would like to grow. There are early, second early, mid and late season potatoes. There are also heritage and rare varieties. By investing in seed potatoes, you are guaranteed to have your potatoes sprout and produce a crop of potatoes, that will not be harmful to your soil and will not leave any pathogens for the next year’s crop.

Store-bought potatoes are often sprayed with a sprouting inhibitor, in order to have a longer shelf-life. If they do sprout, it’s impossible to know where those potatoes grew and if they carry any soil-borne pathogens. Many pathogens take many years to leave the soil, if at all and can infect future crops.

In addition, there are few varieties available at the grocery store. The most common being, Yukon Gold, Red, White, Russet and Fingerling.

Why take the risk and waste valuable time and space with potatoes that may carry diseases or were sprayed with chemicals. If anything, be sure to choose organic varieties, since they wouldn’t have been treated with sprays.

How to Chit your Potatoes: 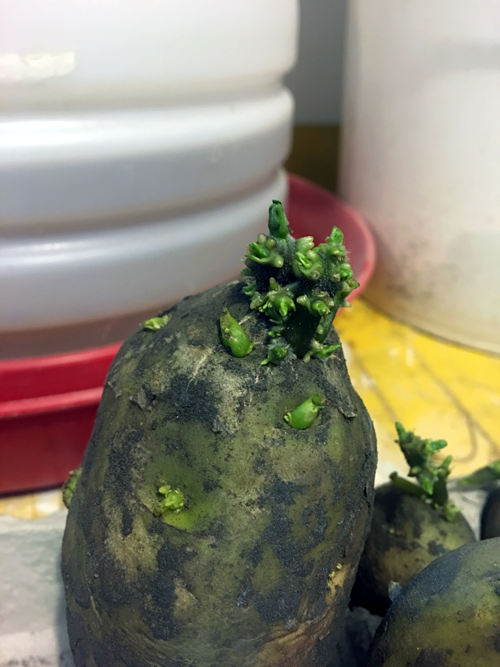 What to do with your potatoes after they have chitted?

After the potatoes have chitted and produced healthy stems, plant them out as you would into containers or the garden. Wait until the temperature is above 50F (10C). Potatoes can take cool temperatures, but if frost is expected, either cover the potato foliage with a blanket, row cover or hill them up with soil. To find the best day to plant out your potatoes, please refer to my Outdoor Planting Calculator.

Before planting, before sure to remove all but 2 to 3 stems from each potato. Any more than that and your seed potato will be weakened. If your potatoes are large and you would like to, you may cut up your potatoes, so each piece has 2 eyes. Be sure to leave them to dry for 1 to 2 days, before planting out. Otherwise, the wet cuts may rot in the soil.

Plant out your potatoes as you would, in trenches or containers and be sure to hill them up as they grow.

I hope you give potato chitting a try. If you have any questions, please feel free to email me or leave a comment below. Also, if you have chitted potatoes in the past, I would love to hear about it. Please share your experience in the comments section.

Here are the tools that I mentioned in the post.

Disclaimer: The links to some of these tools are my affiliate links. Meaning, I will get a small commission at no extra cost to you, should you purchase the product through my affiliate link.